Order of Masculinity is a multi-channel, ongoing investigation of what it means to be a man in contemporary American culture.

It began with a performance where I individually plucked each hair from my beard and glued them to a sheet of paper, one at a time, to create a drawing. When I encountered any white hair, I attached them to the surface of a black canvas. During this 2-month process during the summer of 2013, I did not sequester myself, but went about my life as usual. I was interested in learning what happens when a deviant presentation of masculinity is inserted into the social contract.

As a white, heterosexual male, I was born with--what society asserts is--a loaded deck of privilege and opportunity. One of those privileges is social anonymity. Unlike far too many of my friends and family, I do not get harassed on the street for having a body, I have not been the subject of hate crimes due to my sexual orientation, and I haven't been called a derogatory racial epithet in over a decade. I have no control over the genetic attributes born into me, and I have no desire to speak for or presume to represent any cultural assemblage of persons. What I can control is how I present myself to the world, so I decided to embrace one of my masculine insecurities, which is my inability to grow a full and even beard.

Males are given a fairly wide range of socially-acceptable grooming choices when it comes to facial hair. The common factor, however, is symmetry. Adopting an asymmetrical facial-hair configuration calls constant social attention to my deviancy, and reminds me how vulnerable I am or could be. It is not, however, a completely ostracizing deviancy. People might feel uncomfortable, but no one I encountered seemed outright repulsed. Most often, people either ignored my appearance, or approached me to ask, "What's with the beard?"

I learned two notable things from this experience. One is that the people who ignored my half-beard, gave me very intense eye contact, as if they were trying very hard not to look at the thing that didn't belong. The second was that strangers who probably wouldn't normally approach me for conversation, came up and asked why I had only half a beard. In both cases, what began as a form of self-alienation became a means of social connection. 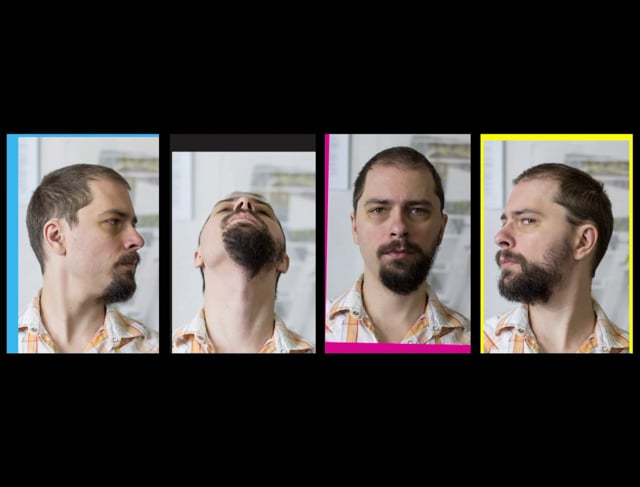